Had a blast the other night at the amazing MotoVida classic motor cycle “emporium” in Kelowna BC. My good mate Jimmy Balfour hosted a party night where he invited some musicians and painters to the funky work-space and we had a blast jamming, painting and socializing with some great friends and family. It reminded me of how important parties are for community.

This beautiful photo was taken the day after at motovida. It depicts a couple of art pieces painted during the party. One is by Carrie Mitchell from the HeArt School and the other by Nikki Balfour who also took the photo. I also love that she included the Vox AC15 amplifier which sounded beautiful.  Gotta love summers in Kelowna.

Great news! After quite a while of not living in the beautiful City of Vancouver I am getting to go back to do a few gigs there again.  The main ticketed event I will play will be on Saturday 2nd May 7.30pm at the Eastside Vineyard and there will also be some other dates which I have listed under the calendar tab of this site.   If you are a guitar player you wont want to miss the VOX Amplifier demo I will do at Prestige Guitars in North Vancouver. I am so pumped for that too! I would love to see you there if you are in the area.

Tickets can be purchased here:

It’s been a little while since I played some solo shows due to my work with either the Blues Revue or The Trips but I have decided to get back on the horse and play more solo shows performing some of the new material I have written over the past few years and sharing some of the stories from the journey. 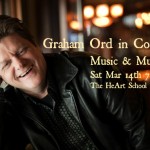 So if you are in Kelowna BC area please come on down to the vibey HeArt School Kelowna on Saturday March 14th at 7.30pm to ‘catch some rays’.

What better way is there to spend a cold winter’s evening in Canada than recording music with a few friends?  I had been asked if I would like to participate in a recording project at Kelowna’s Arts and Tech college (KATO) with young engineer Nathan Peacock.  I called up my good friends Dave Moore (bass) and Dylan Ranney (drums) and they joined me on the session which had to be completed in one evening; quite the feat given that  they had never even heard the tune before!  We went over the song a few times and before you could say funky we were recording.  Time was tight  and we had to overdub the guitar solo in a mad rush before the janitor locked up the place.  Often the best creative stuff happens under pressure eh?

The video I made by turning the laptop upside down using the onboard camera to capture some cartoon doodling.  I went to bed very late that night but what fun it was to do something creative  just because I wanted to.

You can purchase a download of “I’m in Love With You” here: